Since 2015, Michael and his wife Gail have entertained crowds with songs at a variety of open mic nights in Ontario and Florida. But Michael and Gail aren’t your typical open mic night entertainers. Gail has stage two Alzheimer’s disease, and Michael is her primary caregiver.

“Performing at open mic nights has been like a lifesaver for us, especially during the pandemic,” says Michael. “Since we both love music, this is an activity that the both of us can enjoy together.”

Michael has been caring for Gail for over five years, after she was first diagnosed with mild cognitive impairment and short-term memory loss in 2016. 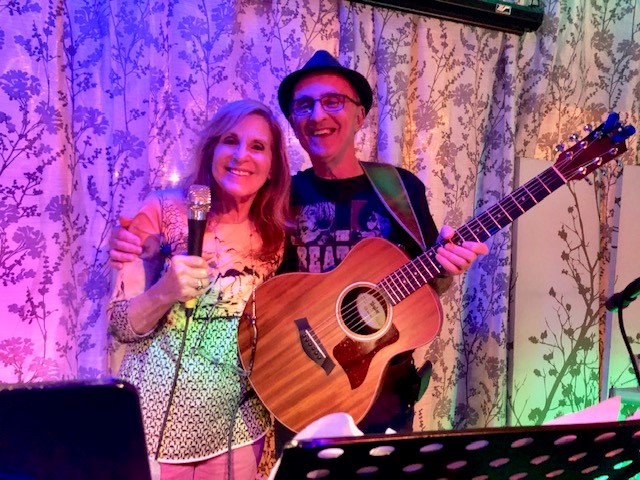 “Before her Alzheimer’s, my wife was very active, physically and mentally and had an amazing memory. She was an ESL teacher who had a million friends and played the clarinet in a 60 piece brass woodwind band,” says Michael.

As the years progressed, so did Gail’s disease, and she lost the ability to read and write long documents.

“It’s shocking to see someone you love go from writing creative works each day and playing an instrument to not being able to successfully write – let alone read,” says Michael.

One of the activities that they continue to do together is performing at open mic nights. Michael notices a major difference in Gail when she sings.

“When you put the music sheet in front of her, all of a sudden she can sing the words more consistently and she can emote better,” says Michael.

This isn’t surprising, given all the research out there on the effectiveness of music on behavioural and cognitive symptoms of Alzheimer’s. A 2014 study published in The Gerontologist showed that both singing and music listening improved the mood and remote episodic memory of those participating in the study, and to a lesser extent also improved attention and general cognition. The study also showed that singing enhanced short-term and working memory as well as caregiver well-being, and that listening to music had a positive effect on the participants’ quality of life.

To help Gail follow along with the songs when they perform together, Michael plays his guitar slightly differently than most.

“Most guitarists strum to a song, hitting different notes at once, but to help Gail, I play it like a piano – one note at a time,” says Michael. “This style is called ‘fingerstyle guitar’. This way, I can feed Gail the notes which also helps her stay in tune and follow along.”

Michael integrates music in their daily life as much as he can. During this pandemic, the duo performs virtually when given the chance.

“These open mic nights have become our social life, whether it’s in person or virtually,” says Michael. “The music is really a life saver. I like playing my guitar and Gail loves to sing, and while we perform it’s like we’re our old selves again.”

Gail joined Circle of Care’s Adult Day Program (ADP) in June 2020. The ADP provides her with a safe environment run by trained professionals that supports her cognitive, social, physical, emotional, and spiritual needs. During her time at the ADP, Michael receives some caregiver relief and manages to conduct other daily tasks while also relaxing.

“Circle of Care’s ADP is a big help for me, and the programs they have for Gail are fantastic!” says Michael.

Musical activities are integrated within Circle of Care’s ADP, and focus on building community, celebrating special events, and bringing a smile to the faces of all our participants.

Circle of Care’s Adult Day Program provides evidence-based programming to clients with dementia and Alzheimer’s who live in the community, and gives their caregivers the ability to rest, run errands, and recharge.. Each day is filled with activities and socialization aimed specifically at those who have been diagnosed with dementia. Staff members are specially trained to handle responsive behaviours, through re-direction and de-escalation. The Adult Day Program is currently being offered virtually only, due to COVID protocols, and will resume in-person activities as soon as possible.